Valencia at a Glance

Valencia was founded by the Romans in 138 BC as a retirement paradise for former Legionnaires. Ever since then it has become a favorite haven for sun-worshippers from all over the Continent with miles of white sandy beaches. Valencia history dates back to the Phoenicians, Carthaginians, Romans, Jewish and Moors communities that settled here.

El Cid re-conquered the city from the Moors in 1096. Later to be re-captured by the Moors. In 1238, King Jaime the First, known as James the Conqueror absorbed Valencia into the Kingdom of Aragon. Today Valencia is the third largest city in Spain. It’s known for its year-around near perfect climate, exuberant outdoor living, bicycling routes, sailing and water sports. Vivacious nightlife and spectacular legendary fiestas like Las Fallas.  Museums, artistic ceramics and the famed Lladro Factory.  Fabulous cuisine and phenomenal new age architecture.

The moment you pass through the Torres de Serranos, a magnificent medieval gateway, you’ll admire the architectural transition from historic Valencia to one of the most modern, innovative cities in the world.  Everywhere you look, you’ll see a seamless blending of medieval culture blending into a brave, new, future world. 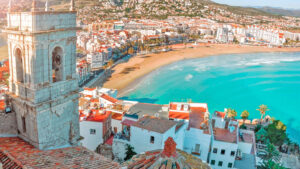 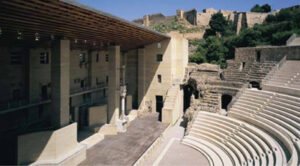 Valencia’s historic quarter is home to the Cathedral of Valencia and Watchtower a unique building, originally built in 1262, offering Romanesque, Gothic and Baroque all in one building.  The Lonja de la Seda (the Silk Exchange) is one of the most remarkable example of Gothic architecture found anywhere in Europe. Built at the end of the 15th century it has been declared a World Heritage Site. The Mercado Central (Central Market), is one of the largest and most attractive enclosed markets in Europe.

North of Valencia is the city of Roman Sagunto, home to one of the best preserved Amphitheaters in Europe or El Puig where the battle to re-conquer Valencia took place in 1237. These are just a few of the 27 historical sites you find throughout the Region of Valencia.

First City of the New Millennium

Valencia’s futuristic vision from master architect Santiago de Calatrava, born in Valencia, is evident when you visit the impressive City of Arts and Sciences. A series of beautiful avant-garde buildings, which include an Opera House, Museum of Sciences, The Hemispheric an IMAX Cinema, planetarium and Laserium, L’Oceanogràfic the largest oceanographic aquarium in Europe, L’Àgora a covered building for concerts and sporting events, the Assut de l’Or Bridge and Montolivet Bridge. It’s no surprise that this city is also a perfect destination for Conventions and Events.

Over a hundred cookbooks have been written about Valencia’s gastronomy. But the best way to discover it is to come to Valencia and sample it! 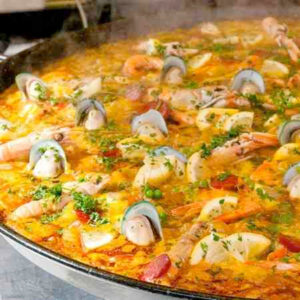 Rice was introduced by the Moors, and this is the city where the famed Spanish dish Paella was created. Today there are over 67 unique rice dishes. Valencia offers superb fresh Mediterranean seafood, tasteful country stews and kabobs, delectable pastries and sweets like Turrones. It’s also home of the delicious Horchata drink made from the Chufa root.

Valencia’s excellent white wines also compliment its cuisine. You can follow the Route of Wines when you visit the Utiel-Requena Wine Valley linked to a history dating back to over 2,700 years.

And there is so much more to see and experience.
Let us introduce you to our Valencia.