Madrid at a Glance

Madrid at a Glance

Madrid is as good as a city can be. As soon as you enter the city you immediately get a sense of her grandeur. There’s nothing Madrilenes love more than extolling the virtues of their beloved city. But then, as you will discover, they’ve got a lot to be proud of.

As you drive along the wide Paseo de la Castellana Avenue or pass by the Puerta de Alcala, a triumphal gate built by King Charles I, you’ll find yourself in a city like no other.  Replete with the regal splendor of a long, lost bygone era. Buildings are trimmed in gold with Greek Gods basking on their roofs. In the former Regal Salamanca district, you will admire the unmistakable Bank of Spain building, the Spanish Post Office regal building, and the fountain of Cibeles and Neptuno, next to “Paseo del Arte“, so called for its unique museums, palaces and gardens.

The Madrid area has been settled since the Lower Paleolithic age, but it was not until 1561 that King Philip II made it the capital of his mighty empire. The historic quarter, also known as “Madrid de las Austrias” (referring to the Hapsburg Empire) is a living example of the city’s 16th and 17th century heyday, as is its impressive Plaza Mayor (square), which was opened in 1620. It remains one of Spain’s most popular and typical spots.

Near La Plaza Mayor is the so-called “Aristocratic Center” of Madrid, home to the stunning Royal Palace, a 17th century monument that combines Baroque and Classical styles. Next to the palace you will find the Plaza de Oriente Square, the Opera Houseand the Almudena Cathedral, consecrated in 1993 by Pope John Paul II. This ensemble of monuments also leads to La Puerta del Sol, a popular square flanked by great shops and also known as kilometer zero. From here distances are measure to other cities in Spain. Close by you is the popular Gran Via Avenue also a favorite for shopping, cafes, theaters and restaurants. 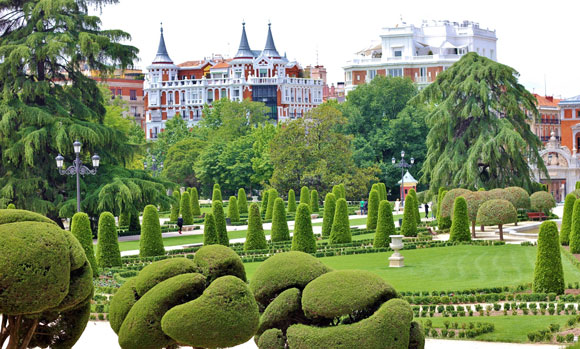